Elizabeth Horton-Newton, "The Seductress of Suspense"
﻿Chapter One﻿

Kort gazed out the bus window as the countryside sped by. Seven years, seven months, and seven days and things looked the same. Turning away from the window he tried to stretch his long legs in the cramped space allocated to passengers of all shapes and sizes. Out of the corner of his eye he caught sight of a young boy, maybe nine or ten, staring at him. A child's cowboy hat sat crookedly on the boy’s head. Suddenly the boy lifted his hand and squinted his eyes like a sheriff in a wild west adventure; he pretended to shoot at Kort. Kort did not react. He didn't blink, he didn't smile, he didn't frown. A woman peered over the top of the seat and catching sight of Kort's impassive stare she pulled the child back, out of Kort's line of vision.
"But Mom he's an Indian." the child protested rather loudly.
Over the tops of the seats Kort could see some heads turn as the mother shushed the child, admonishing him to lower his voice and stay in his seat.
The bus grew still again but after a few minutes the small head peeked back at Kort and the boy stuck out his tongue. He was swiftly pulled back and the sound of a soft slap followed by whimpering once again broke the silence.
Kort leaned his head back and closed his eyes. Seven years, seven months, and seven days and nothing had really changed. He was older, taller, and leaner. He had earned his high school diploma and put a Bachelor of Science degree on his almost bare resume. His hair had grown long; he'd grown a beard and shaved it off. But his skin still carried the bronze of his heritage.
He felt the bus turning and opening his eyes he saw they were coming into town. There was a new gas station at the highway exit, bigger and shinier. Several more businesses had popped up on the road. As the bus wove its way more deeply into town he saw the high school. The football team was practicing, the cheerleaders jumped up and down their short red skirts flapping in the cool autumn air. He saw one girl, her blonde ponytail bouncing with each hop and felt a pang remembering Desiree.
He closed his eyes again and for a moment he was seventeen with the future stretched out before him and all the promise of life yet to live. No point going there. He was no longer seventeen. He was a grown man of twenty-six with a criminal record. He was a convicted killer and no one would see him as anything else.
As the bus slowed he opened his eyes. No one would be waiting for him. His adoptive father had died while he was in prison. His adoptive mother blamed him saying the stress of his crime was too much for her husband to bear. She conveniently ignored the fact that the man was almost seventy years old, had smoked since he was a teenager, drank beer like water, and straight single malt that smelled like tar. He was at least seventy pounds overweight. That had no impact on his demise. It was Kort's fault.
The bus stopped and the mother slipped out of the seat past her son and began gathering the few belongings they carried with them.  As she led the boy off the bus he turned back to look at Kort and gave him a conspiratorial wink. Perhaps some things had changed.
Surprised, Kort watched as they waited at the side of the bus for their luggage to be unloaded. Then standing up slowly, careful not to bump his head, he slipped into his denim jacket and made his way off the bus. The rain had stopped and the sun was beginning to break through the clouds. As he removed his small suitcase from the bus drivers hand he heard a woman's voice call out his name. His stomach tightened as he turned to see Norma standing on the walkway. He recognized her immediately although her dark hair was cut short now and she had filled out to a more womanly shape during his stay away. But her nose still turned up slightly and her dark eyes still glittered like deep pools under a glowing moon. Norma moved toward him, her step slightly hesitant. He noticed she wore a white uniform.
"Norma." He tried to keep the surprise out of his voice but it crept through.
She looked up at him and he thought she was a lot shorter than he remembered.
"You've gotten so tall," she whispered before standing on her tiptoes to place a light kiss on his chin.
Of course she wasn't shorter, he was taller.
"How did you know..." he began, but she cut him off.
"Everyone knows. You're the talk of the town." Norma took hold of his hand and led him toward the parking lot beside the depot. "Let's get out of here before someone comes along and tries to start trouble." 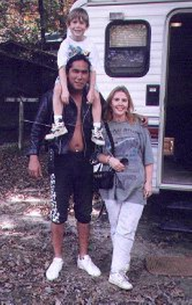